Last night marked a historic moment for tenant rights in Kern County. In the span of just three months, determined Ridgecrest tenants, working with Tenants Together, organized and successfully pushed city officials to pass a just cause eviction law for tenants in bank-owned properties after foreclosure, the first tenant protection law ever passed in Kern County.

"This is a great day for Ridgecrest tenants and for the entire community," said Bob Nostrand, a Ridgecrest renter who helped lead the effort to get the law passed. "This will bring desperately needed relief to renters who are innocent victims of the foreclosure crisis."

Ridgecrest now joins the cities of Richmond and Los Angeles in addressing the crisis facing tenants in foreclosure situations by passing new just cause eviction laws that will allow innocent tenants to remain in their homes after bank repossession.

“We congratulate Ridgecrest residents and their leaders for passing this essential law," said our director, Dean Preston. "Our communities are fed up with unfair evictions by huge national banks. This kind of eviction law is a cost-free way for local governments to protect their residents from unfair displacement, prolonged vacancies and blight.”

This extraordinary victory for Ridgecrest renters should inspire other cities across California and the United States to protect innocent tenants from displacement and homelessness by implementing similar just cause eviction laws. As told in an earlier blog post, we have been honored and pleased to work for the last few months with an extraordinary group of tenants from the La Mirage Complex in Ridgecrest. We first learned of their plight in May of this year via our tenant foreclosure hotline. After receiving calls from dozens of tenants living the La Mirage neighborhood, we began to investigate and soon discovered that many Ridgecrest renters -- like renters in San Diego and Escondido -- had become victims of a statewide mortgage fraud scam involving convicted felon, James McConville and his affiliated real estate investment companies.

Virtually all of the 300 units in La Mirage were in foreclosure or facing impending foreclosure and virtually all of them were renter-occupied. Residents were facing eviction due to no fault of their own in in a city with a less-than-1% vacancy rate and had essentially nowhere else to go. [Media coverage.]

To make matters worse, many tenants were almost completely in the dark about the status of their homes and were unable to get accurate information from their management company, Diamond House Development. Diamond House, not coincidentally, was run by McConville the central figure in the mortgage fraud scam. Tenants were reporting that trustee sale notices were being removed from the front doors of units by the company's staff. Tenants were receiving 3-day pay or quit notices from Diamond House even after the homes had gone into foreclosure and it was not at all clear that they were legitimately collecting rent on behalf of the actual owners of the properties.

Tenants Together began to meet in phone conferences with groups of La Mirage tenants. Tenants started organizing and on May 20th they showed up in force at a City Council meeting to voice there issues and demands. [Media coverage.]

We issued a press release and statement calling for the city to take swift action to help tenants. We also suggested that, until Diamond House Management could provide evidence that it was legitimately collecting rent on behalf of the actual owners of the properties, that tenants might want to withhold and set aside their rent. As we suspected, many tenants who withheld their rent were never provided with such evidence and were never given pay or quit notices or eviction notices.

Fortunately, after sufficient light was shed on the situation, Diamond House backed off some of its more questionable practices, but the fact remained that numerous innocent tenants were facing eviction and had few if any options for places to relocate to in the community. Ridgecrest was in the midst of a full-blown housing crisis and City officials needed to take swift action.

Two of our staff and one board member traveled to Ridgecrest to meet with tenants and community leaders and to participate in a town hall meeting for La Mirage tenants along with Greater Bakersfield Legal Assistance and the Kern County Housing Authority. At the town hall meeting, the city council chambers were packed with Ridgecrest tenants who came to learn about their rights and to tell their stories and voice their concerns to the City Council members present at the meeting. Tenants filled the City Council Chambers at a Town Hall meeting where Tenants Together participated along with Greater Bakersfield Legal Assistance and the Kern County Housing Authority.

At this meeting and at a full city council meeting the following evening, La Mirage tenants and Tenants Together called on the City Council to quickly draft and pass an eviction protection ordinance, similar to one that had just passed in Richmond, to stem the epidemic of unnecessary evictions due to foreclosure.

During our visit to Ridgecrest we were able to meet face-to-face with tenants in their homes where we heard their sometimes heart-breaking stories. We were so inspired by their awaking tenant consciousness and their determination to advocate for themselves and their neighbors. Folks who had never-before set foot in city hall were become savvy, outspoken activists and they were clearly making a difference. 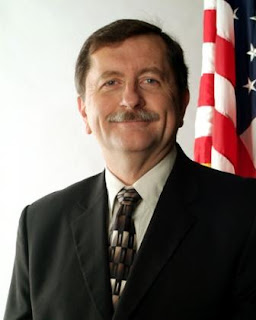 Over the coming weeks we remained in close contact with these tenants as they repeatedly brought their stories and demands to City Hall pushing the City Council to act. One council member in particular, Jerry Taylor (pictured right), proved to be a forceful advocate for renters by championing the ordinance and pushing his colleagues to support it as well. Councilmember Ron Carter took a strong stand for the ordinance.

Despite pushback from developers and local realtors, within about two months, the city council has passed a just cause eviction law and history has been made for tenant rights in Ridgecrest and Kern County. Again, communities across the state and the country should take notice and follow Ridgecrest's lead in protecting tenants in foreclosed properties.

We wish to thank and congratulate the tenants of Ridgecrest who boldly stepped up and worked so diligently for this victory. Their efforts should serve as a model for others to follow throughout California. La Mirage tenants Karen and Miguel Martinez
Posted by Andy Blue at 8:00 AM

About Rent and Rants

This is our blog for tenants, organizers and advocates to share their opinions and updates on tenant issues in California. Tenants Together is California's Statewide Organization for Renters' Rights.www.tenantstogether.org

Tenants Together invites postings and comments from tenants, organizers, advocates and others who are committed to tenant rights. The views expressed on this blog are not necessarily the views or official positions of Tenants Together.

Tenants Together prohibits the posting of comments that are libelous, defamatory or obscene, threaten the safety of others, or violates any other person's copyrights, privacy rights and/or trademarks. Tenants Together reserves the right to remove content in its discretion.